All the framing has now shown the outline of the inside of the apartment building.
The common room/la salon now has the windows installed & they look great! 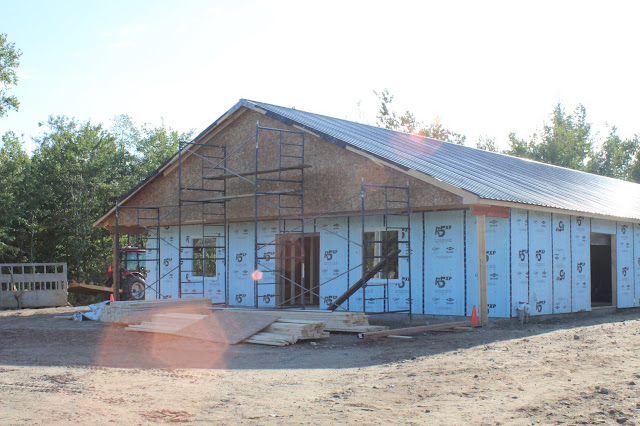 The entryway has been ordered & is custom due to the 'swing out' entry. The windows are in the front & the steel roof is on! 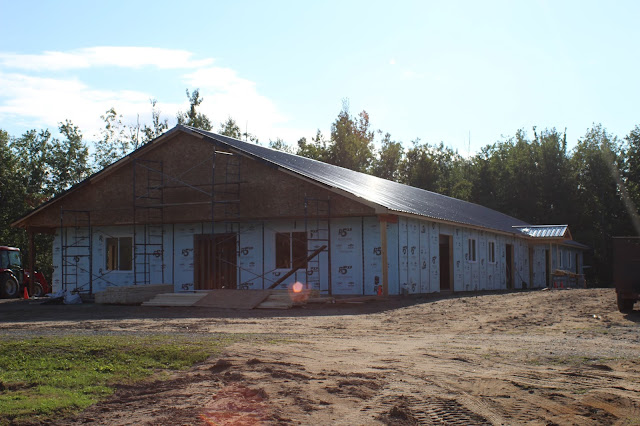 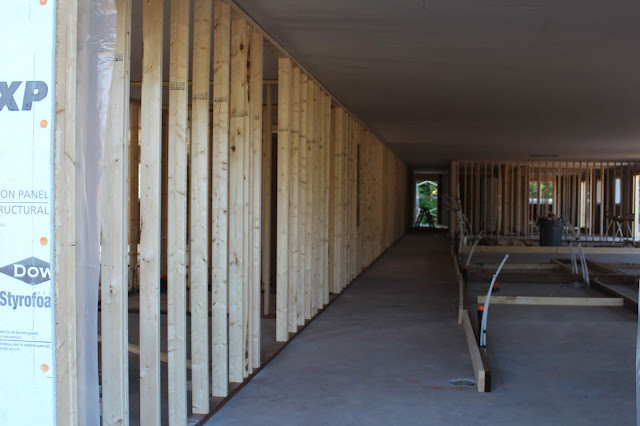 The hallway on one side is now outlined with the wooden framing & these photos were taken Thursday night... 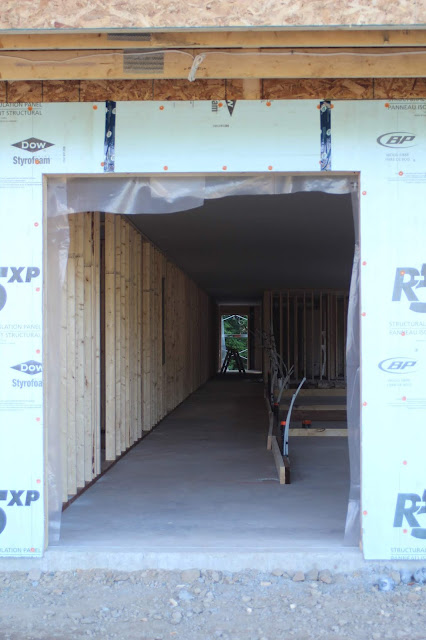 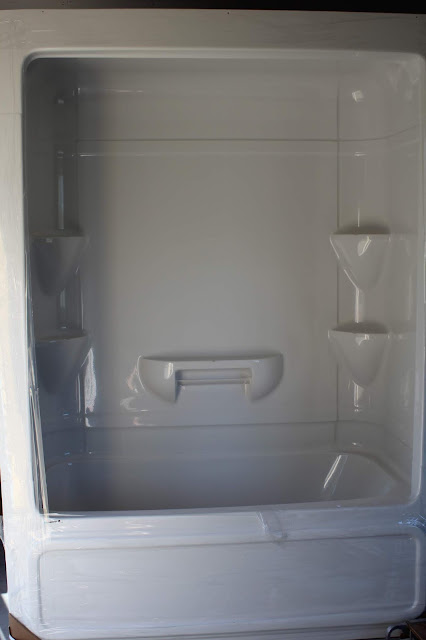 The one-piece bathtubs arrived & they're a thing of beauty for there are no seams anywhere! 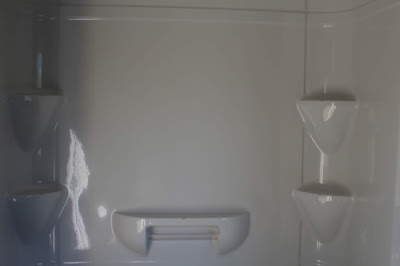 The built-in shelving & holder are very functional too!
I have the same tub in our home & I just love it for the ease of cleaning. 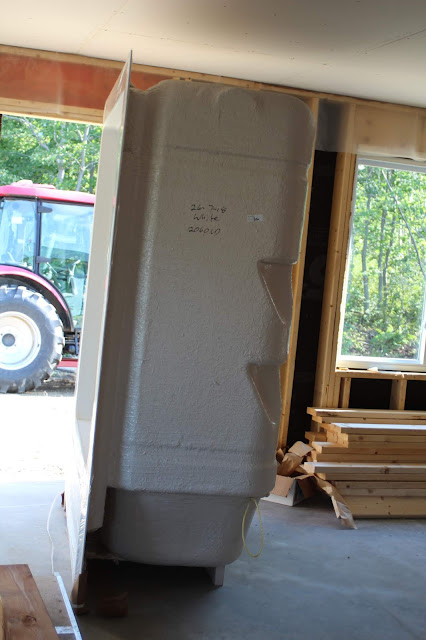 The side view of the one-piece tub. It has to be put in before the wall construction due to its size! 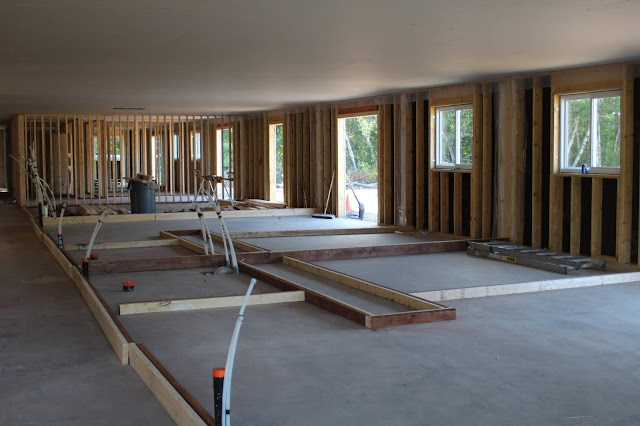 The other one bedroom apartments, storage area, & Bill's office are being framed today. I'll go & take photos later tonight when the day is done & will show you at the end of this post. 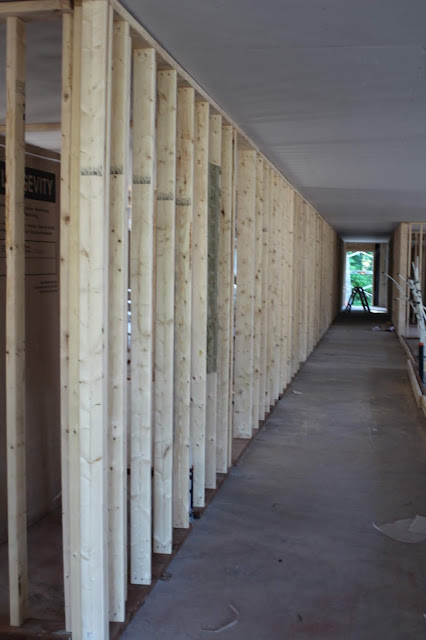 The hallway will be done with commercial grade carpet tiles, it helps to keep the noise & dust down.
We had them in our place of business in London & it worked great there for high traffic use down the hallway to the offices. 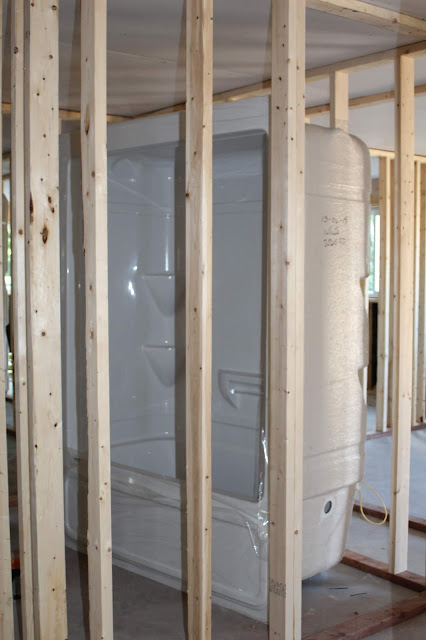 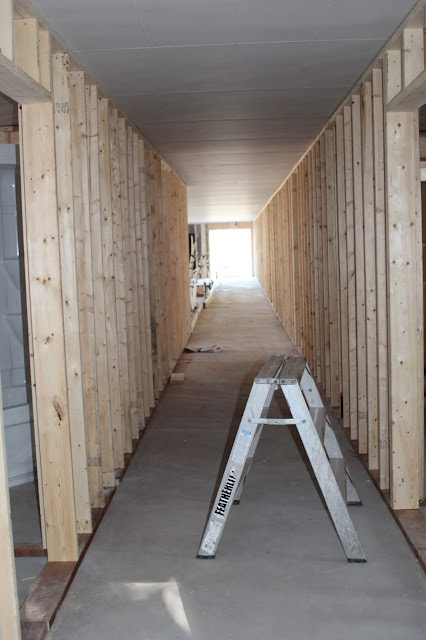 This is the back of the hallway looking to the front. 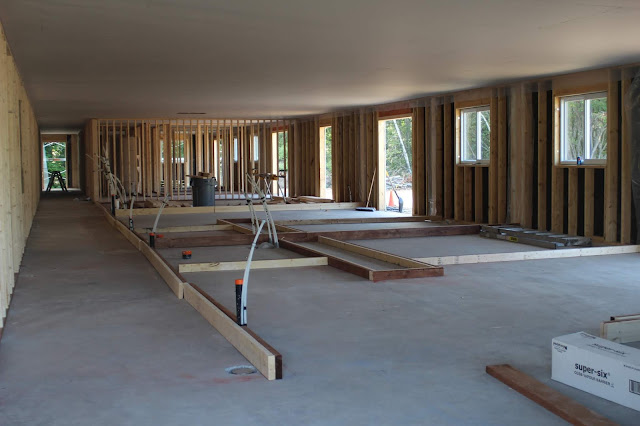 This has been a fast framing from Durelle Construction workers, job well done indeed!

Here's some behind the news on this construction.
On Tuesday night at the  Whitby Ontario IKEA, Nicholas & Bill loaded the trailer & the back of the truck with seven IKEA kitchens, seven IKEA stoves, & seven refrigerators. The loading dock there took photos as it was the largest single order they had ever had!
On Wednesday night Madison our 15 yr old granddaughter arrived in Brampton to go with her Grampa on his adventure to deliver these kitchens to Baie-Sainte-Anne, New Brunswick. They left Brampton at 3:30am & the adventure began with a flat tire on the trailer in River-du-loop & the just outside of Edmundston the trailer bearing gave out & the trailer was left on the medium & they came home to Hardwicke. Oh, be still my beating heart!!! The trailer FULL OF IKEA kitchens just sitting there overnight?!! near the Quebec border?!! Bill reassured me that the RCMP had been notified & he would return the next day to fix the trailer & bring the fixed trailer & kitchens, complete with the seven IKEA refrigerators & seven IKEA stoves to the job site in Baie-Ste-Anne.
And, he is doing just that & the last call from him was that the construction in Campbellton will be another 1/2 hour or so on his travelling time. New Brunswick & Ontario seem to have the same seasons... of 'Construction & Winter'! Plaster rock would be shorter but way too dangerous with the weight of this load, not to mention the potholes & loose gravel to haul it all over too!

Things do have a way of working out, don't they?!

Yes, they do!!
Bill arrived safely with trailer in tow. The trailer did do a bit of twisting due to the heavy load but that should better once it is emptied of the appliances & seven kitchen cupboard uppers & kitchen lower drawers. 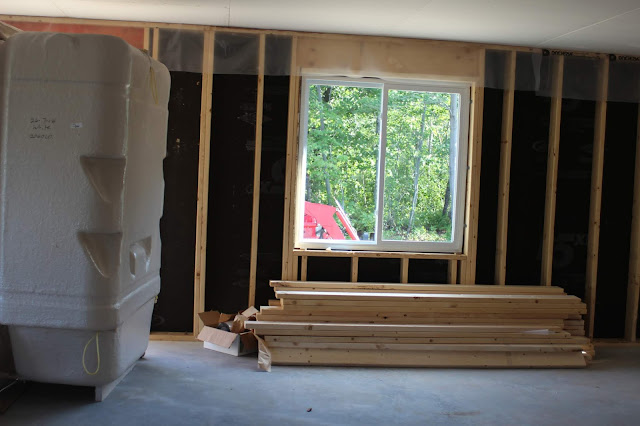 The La Salon/Common Room has turned out to be a really nice size for the tenant's leisure time together with friends & family. 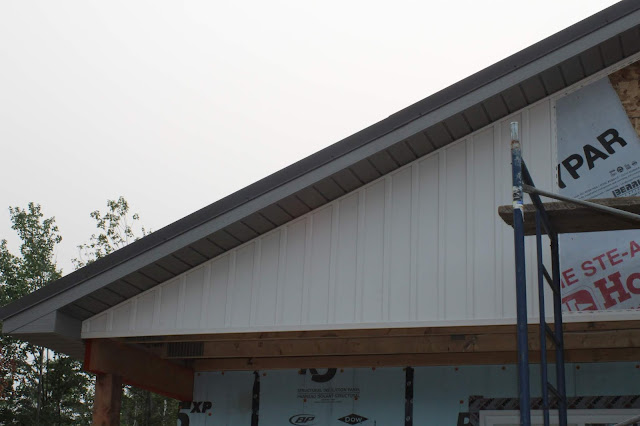 The front of the building is getting a finished look with the batten board started & the facia & soffit getting done. The siding would have started but Home Hardware had a delay in delivery of the eight patio doors, hopefully, the  patio doors arrive early next week so the siding can begin. 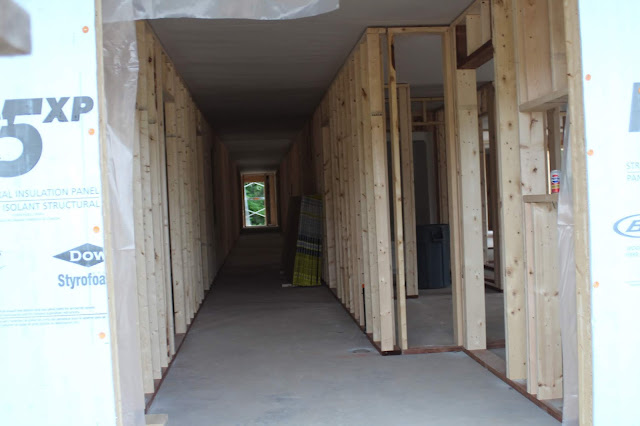 The hallway is now complete & all framework is done too! 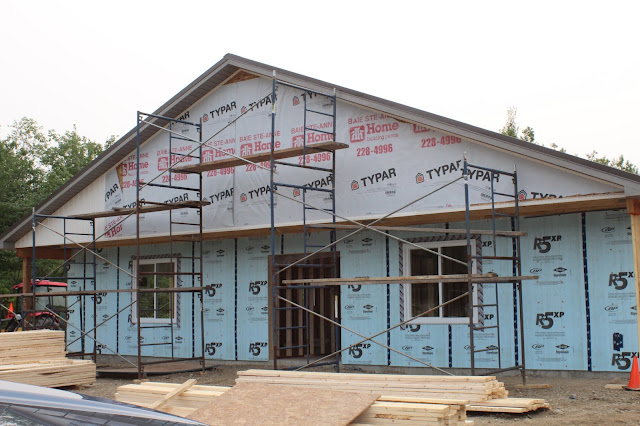 A lot has been done this week too! Everything is coming into place.
The underground hydro has been run by NB Power today also. So much goes on that is not even seen with so much more to get done before this gorgeous summer turns into Fall with is just around the corner!

Thank you for stopping in to see the apartment progress.
Durelle Construction is doing a fantastic job!

Have a wonderful summer weekend wherever you are!
Cynthia