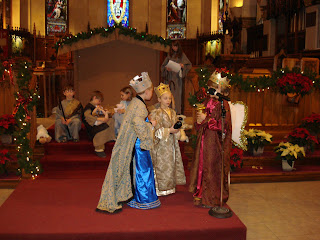 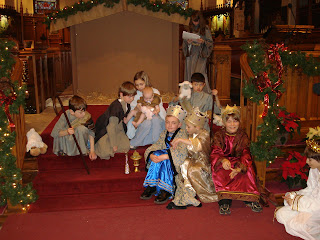 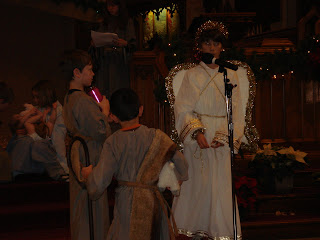 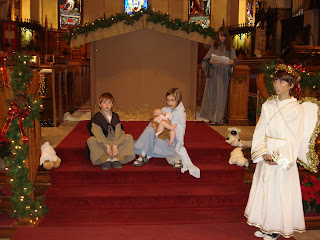 Posted by Kyrotime at 5:03 PM No comments:

It's New Year's Eve & just one week ago it was Christmas Eve & I was watching the Nativity Play with my grandchildren in it with my daughter & eldest grandson narrating the story. In less than one month I made the costumes of  both Mary's, Joseph, three magi's, 3 Shepard's, Gabriel, & eight angel wings...it was great to watch the children in their roles. That was just one week, I cannot believe how distant it feels now.  And now I have the freedom to make other creations. Tomorrow I'm going to participate in the Mystery Mayhem table topper, it's all done on line, fabric has been chosen, the cutting is all done . Now only one sleep away, waiting for the first instruction at 11am eastern time, ending at 3pm. Happy New Year 2011!
Posted by Kyrotime at 4:44 PM No comments:

Granddaughter Waverley played baby Jesus for the Children's Service at St. Paul's Cathedral. For her Christmas morning I made her a Holly Hobbie sock from a kit that I purchased from Mary Maxium. The sock took over 80 hours to embroider, sequin & bead, & hand stitch together. The inside is lined with a paisley fabric  made by the Waverly Company, this is now her heirloom made with love by her Grandma, her mom's mom. She also received a Sunbonnet Sue's quilt in Redwork, a project that I carried around North America for a year, doing a block here & a block there, till 12 blocks were complete. Then I put them together & quilted by machine using a X design to show all my kisses for her. Her three older brothers also received quilts for Christmas. 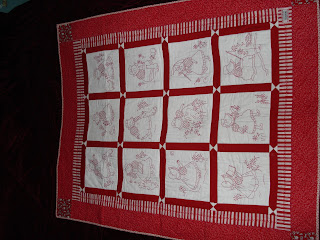 Posted by Kyrotime at 2:04 PM No comments: 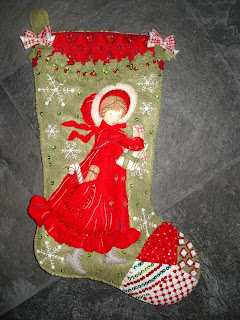 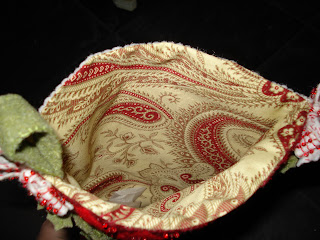 Posted by Kyrotime at 1:48 PM No comments:

The backing, all serged, washed and dried! 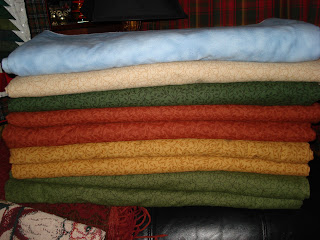 I'm going to attempt documenting here rather than my Winter Wheat journal. Already the spell check is improving my spelling! I'm not a techno however I've been offered help to learn...so it begins!
Today was a most successful shop at The Marsh Store in Coldstream with my quilting buddy. The purchase was mainly in flannel backing, 108" width with 2.5 meter length, I now have a square that will fit a queen size quilt top. I'm fond of flannel backings as the quilt doesn't creep of the bed & wrapping in the flannel is cozy & stays on you if your wrapped in a lap quilt. Several backings were purchased now I need to work on those quilt tops, with the backings serged, washed & dried ready to use.Let it Snow...so I Can Sew.
Posted by Kyrotime at 8:06 PM No comments: