To my surprise...I was mentioned in an article written by my relative Alice Lukacs, a freelance writer living in Montreal. She mentioned to me that the article was published & the editor wanted to use my saying that I once told her...she had changed my name to Cecily, to protect my privacy from those in Montreal? She's the only one I
I know there!!
I was flattered that she thought to mention me in such a positive way :) 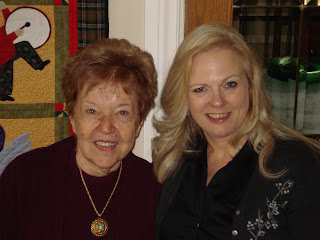 "When was the last time you did something for the first time?"

The boomer generation and beyond; Retirement: The time to seize the day

BY ALICE LUKACS, FREELANCE MARCH 28, 2011
You are now on your own. The house is empty. You have downsized and collected your retirement gift from the company. Now what? Empty days and hours are staring you in the face, ready to be filled with some meaningful activity.
Some of us take the easy way out, grabbing the first activity that presents itself or spending hours in front of the TV set. Others give it some thought. There are those who take a daring leap into the unknown to reinvent themselves in this new stage of their life.
All these thoughts occurred to me after reading a delightful short story as part of a Thomas More course I am taking at Montreal's Contactivity Centre. The story, entitled The Unexpected Mrs. Pollifax by Dorothy Gilman, deals with the possibility of finding a new career at a later stage in life. The elderly heroine, encouraged by a newspaper story about a woman who, at age 63, became an actress and appeared on Broadway, decides to pull herself out of a debilitating slump and follow her childhood dream which was to become - a spy! Then she takes concrete steps to make that dream a reality, going to Washington and applying for a job as a spy - as "unexpected" of a woman her age as that other woman's acting debut. Will she succeed? The question remains unanswered.
The message, though, of living up to one's full potential, makes sense. Retirement could mean the opportunity of doing something one has always longed to do, but never had the time or freedom to accomplish.
Everyone hears about "bucket lists" and about a thousand-and-one places to see before one dies. Trekking in Nepal, exploring Inca ruins in Machu Picchu or learning to tango in Argentina are all well and good. A "wish list," I think, is somewhat different. It requires more introspection - and the courage to carry our project to completion.
Perhaps applying to become a spy is a bit of a stretch, but other plans could be more feasible. We hear stories of people leaving the city and opening inns in the country post-retirement, something they had always dreamed about. Some executives I know have taken flight to offer their expertise in thirdworld countries. A friend of mine wanted to pursue a university education, donning cap and gown and graduating at age 75. The list of possibilities is endless.
My relative, Cecily, is not waiting for her retirement to reinvent herself. She does it with some regularity every so often. Since I have known her, she has been, in succession, a race-car driver, business person, president of various clubs, designer of theatrical costumes and quilt maker. Now in her 50s, a wife, mother and grandmother who lives in Ontario, she recently decided to relocate for the summer months, buying and renovating a house near the sea in New Brunswick. Her motto is, "When was the last time you did something for the first time?" I admire that.
A few years ago Good Times magazine ran a series entitled Role Models, presenting innovative and happy retirees. Among others featured was a friend of mine, formerly a university professor of neuroanatomy. Moving in a completely different direction after retirement, he took advantage of his manual skills, opening a woodworking shop where he creates fine pieces of furniture. As well, always fascinated by drumming, he took up the instrument, taking classes and joining a band at university. You could say my friend didn't miss a beat!
Do you have a wish list, something you have always wanted to do? Perhaps now is the time to get going. It's all about instilling novelty and purpose into one's life - and doing the unexpected.
As for me, one of my aspirations became a reality when I became a journalist after taking early retirement. My other dream, though, is more deep-seated.
Ever since my childhood in Budapest, Hungary, I have been fascinated by the world of the theatre, attending many plays. I even showed some acting ability, taking the role of the father in a school production of one of Molière's plays.
Encouraged by my success, I have been dreaming about becoming an actress or being involved in any way in the theatre.
I am still working on that one. How about you?
© Copyright (c) The Montreal Gazette 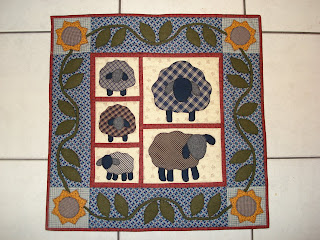 Baa Baa Plaid Sheep was a spontaneousness(thank heavens for spell check!) creation. I saw the pattern in my pattern box & thought ...I`ve always wanted to do this!(along with some 100 others)  I used only from the stash on hand & machine quilted & appliquéd it, very quick little project.
Yesterday on a trip into Coldstream, I saw the sheared sheep & commented to my friend Bev, that came along on this road trip, how I loved & wanted sheep. She suggested that I make sheep as in live in the downtown area of 356,000 people & this would not be possible. She had not seen this project yet!! I've another project in mind & have that pattern buried in a bin somewhere...maybe this summer it to come to life!
Posted by Kyrotime at 4:25 AM 1 comment:

Tulips in Colour - I Love Spring! 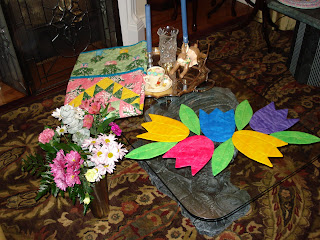 This tulip runner was made from a collection of bright fat quarters that were given to me by my quilting buddy Paulette, some years ago! The brightness is what was needed, to convey the colour &life that spring takes on & my garden was my inspiration. The Art to Heart 'Spring' pattern book was the pattern used. I was pleased to see a table topper made a couple years ago, co-ordinated beautifully! Is it not great when these surprised happen? Cones, with tulip flowers in the same colours,  have been cut out & are waiting their turn to be appliquéd... then sewn. Sew much to do...
Posted by Kyrotime at 4:10 AM No comments: 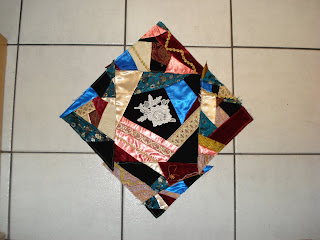 I did a workshop with Bev White to learn the technique of doing a crazy quilt. The woman is such a joy to spend the day with, her wit & humour & the ease of learning this art was an enjoyable day. I have the foundation of the square done, now the embellishing can being. I've many left over embroidery threads from the last project!  :)
Posted by Kyrotime at 3:55 AM No comments:

Border & Sashing/Binding for A to Zzzz 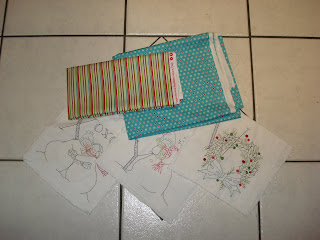 The blocks will be put together then 'feather stitched in red thread' on the seam lines...sashing,border, & binding.
The finished quilt will be coming soon...so much to do... sew little time!
Posted by Kyrotime at 3:47 AM No comments: 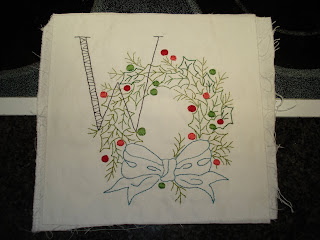 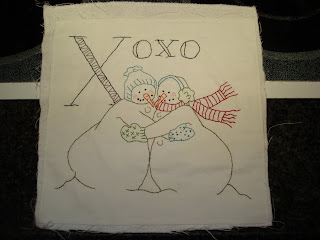 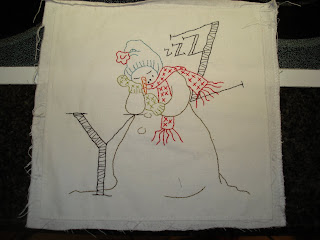 Finally complete! Yesterday I bought the sashing & binding chose, thank you to Shirley at the Marsh Store in Coldstream, I found the perfect border, sashing & binding, however I did not bring my pattern...Shirley looked up the pattern & figured what was needed by the size. The stripe will be the small sashing & binding(on diagonal) & the dots the border, how colourful it will be!
Posted by Kyrotime at 3:41 AM No comments: 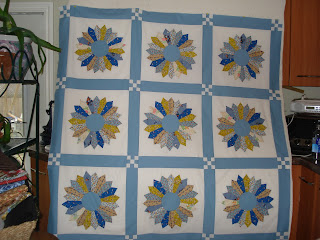 I was given a bag of 'left over quilting scraps' from a friend of a friend.  The quilting goods, were from a woman that had passed away & the cleaning of her room had items that were not of any interest to her family. In a plastic 'Young Canada' bag, I found  ten, folded  Dresden Squares that had a tight zig-zag onto beige poly-cotton & some chocolate brown circles, also a very small photo of inspiration for her pattern & colour choice. 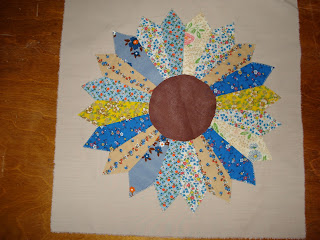 Original design on poly-cotton with a brown circle 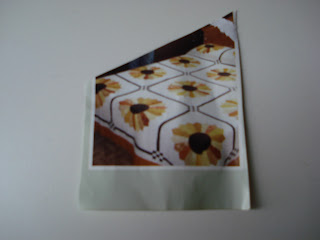 The inspiration photo with the brown accent colour... 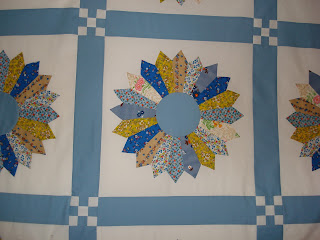 The finished blocks...after many hours with the seam ripper, I  carefully removed  the zig-zag stitching.  The plates were then ready for there new 17" white Kona cotton blocks. I then hand appliquéd the flower plates  & circles on each of the nine 17" squares. One more square remains & I hope to make a co-ordinating pillow for this quilt, using the left over blue & white fabric, when the quilt is completed.
The backing & binding will be of the same blue as the front, it's now ready for machine quilting. Then it's off to the cottage, a lovely summer quilt in white & blue, making the Dresden flowers shine through.

I'm really pleased with the finished top & I hope she's smiling down on me finishing what she started so many years ago. It does make me think...what will happen to my stash. My husband laughs when I say I have a stash & corrects me to say 'it;s not a stash... it's your inventory!' & yes you have won! I use to tell him 'she who dies with the largest stash wins' With the cost of cotton going up, this inventory makes me smile :)
Posted by Kyrotime at 6:51 PM No comments: 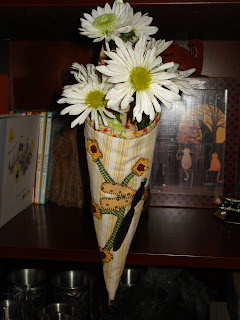 I made a spring cone from some scraps & put in some fresh flowers pushed in the florists tubes. Such a pretty sight to view. The pattern was from a Art to Heart pattern. I'll be making these for all seasons & occasions, what a pretty hostess gift. It even has a handle for easy hanging & transport. An Easter one filled with Easter goodies is my next project.
Posted by Kyrotime at 8:06 AM 1 comment: 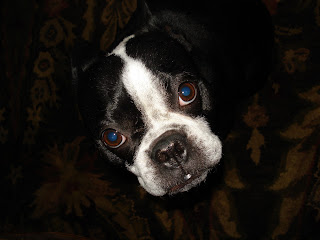 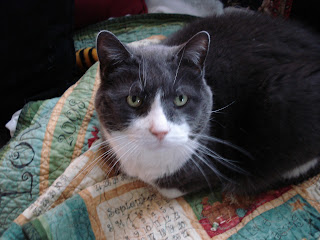 Boris, the Boston Terrier & Bose, the 13 year old feline, are basking in the sun these days...feels like spring. The tulip bulbs are pushing forward, to the sun, they were starting that last week when they were dumped by the snow.  April showers will bring forth all the dormant underground, as it begins it spring thaw. Then begins the springing forth of more green buds, shoots, & the green lawns will once again appear.
I've been to Epcot in Walt Disney World & the motto there goes... "If you can dream it...then you can do it!"
Spring & Fall are my most favourite times of the year, the life & death of our seasons or the coming & going of our seasons. To me it's the colours that are produced by nature...a different palette for each season.
Right now the bright yellows, pinks, mauves, are so up lifting after this long winter which has is now left from the white snow, all greys, browns, & vehicle exhaust colours.
Posted by Kyrotime at 7:51 AM No comments: 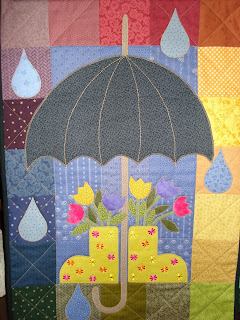 April Showers bring May flowers...
This is another calendar quilt from the series that I started, only 9 more to go to complete the year! I couldn't resist adding the flowers motifs to the plain yellow fabric, making the boots even more colourful.
I recently purchased a pair of colourful rubber boots for the spring 'April showers' too...well maybe not colourful but interesting in a red, grey, & white abstract floral.
Posted by Kyrotime at 3:17 AM No comments: