This has been the fastest month this year!
I've had many visitors come & view the water from the kitchen window or their bedroom window & watch many a beautiful sunset over Bay du Vin Island.

This week was for the birds, many ducks were in the water, many, many ducks. I have never seen so many ducks.
Then the Canadian geese were parked out in the backyard for a few hours. 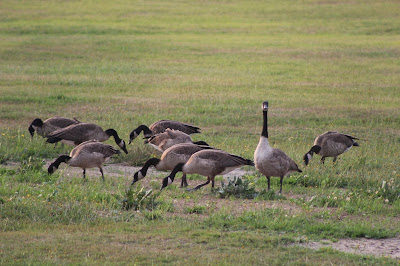 The upright goose always stayed in that position whilst the others pecked away. 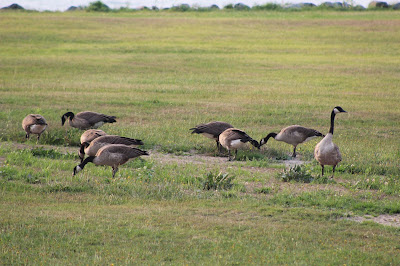 I was hoping that they were not feasting on the grass seed! 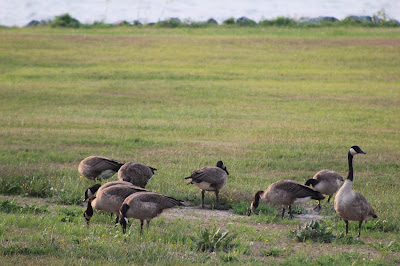 Whatever it was they were enjoying it! 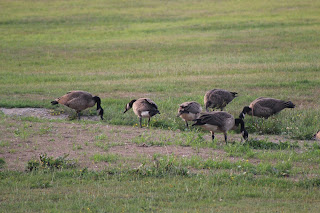 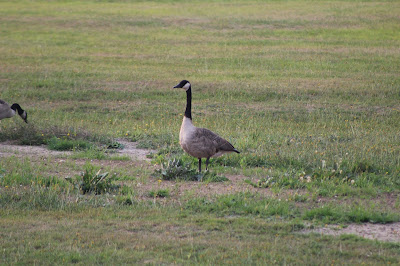 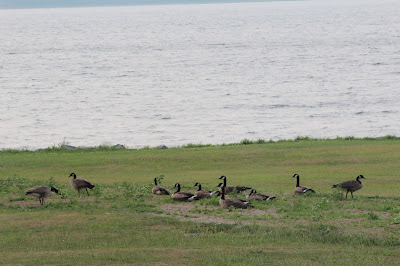 Then they all nestled in for an afternoon rest. 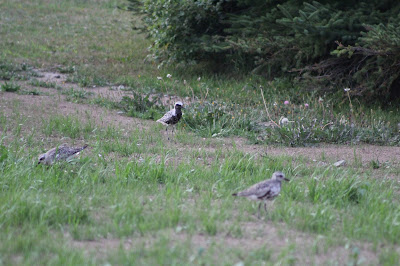 Then these fast moving birds, I think they were Sandpipers, joined in by the large evergreen. 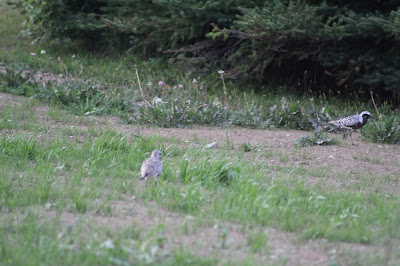 It was hard to get a good photo of them as they were moving very quickly!

So that was the wildlife in the backyard this week! 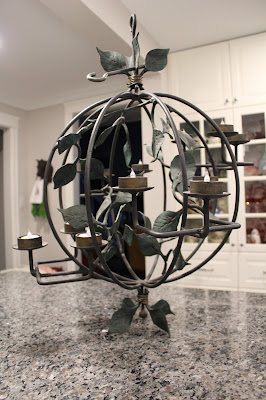 Before my girlfriend Sandy left, she gave me this handmade wrought iron orb! A couple of months ago, my girlfriend Elizabeth texted me a photo of it from the new antique shop that had opened in Chatham. She said it made her think of me! Oh, how my girlfriends know my style!! 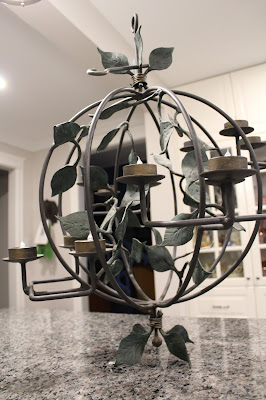 It is a twelve candle orb & will hang in the sun porch from a pulley. I saw Sarah Richardson do that in one of her shows. Mine will be battery operated candles, maybe IKEA votives on chilly fall nights. 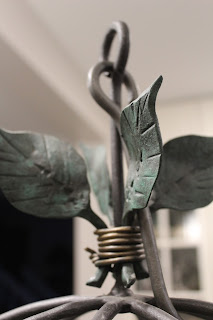 It has such detail & will hang lowered from a steel hanger to the ceiling. Photos to follow after Bill's visit next week. 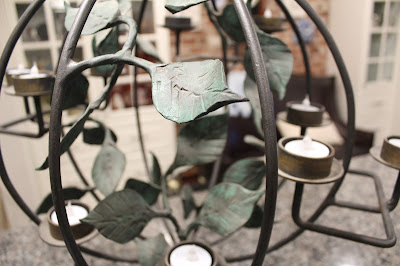 The detailing is beautiful & the hit of green on the leaves really brings it to life. Thank you, Sandy!
It was an early birthday present as in two weeks I am turning the big 6-0! Wow, where has time gone?!! I've sure been blessed with good friends along the way!

Kathleen, a neighbouring girlfriend, asked if I wanted to go to the Beaverbrook Garage Sale, it was not what we thought, however, I did come away with a few finds. 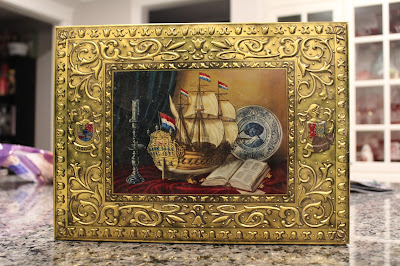 This embossed tin really caught my eye at $5, the vendor then asked if I would be more interested in it for $3? 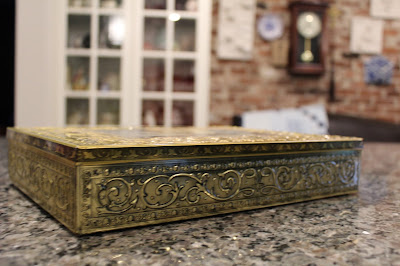 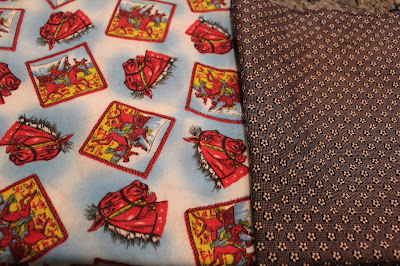 Then I spied this vintage flannel with the horses that made me think of the Alberta son, there were 2 yards of it & the other cotton fabric made me think of the Civil War prints. Kathleen gave the man $1 & both were now mine!  She sure knows how to haggle a good price! Thank you, Kathleen! 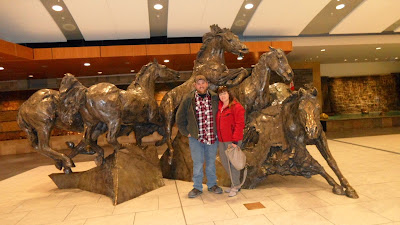 My handsome middle-son Mitchell a photo in 2012 at the Calgary Airport, when I went to visit him for the first time. Yes, the flannel horse fabric,  made me think of the Alberta bound boy of mine! 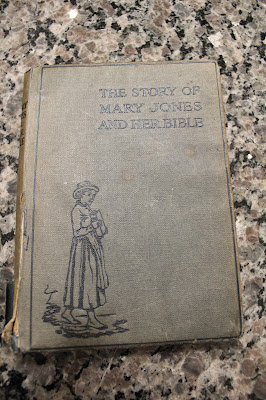 Kathleen presented me with this antique hardcover story book. It is a true story of a Welsh girl & how the Bible Society began, nearly 200 years ago! 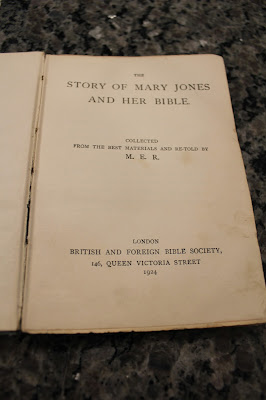 This is the 1924 version of the book & I have been enjoying reading it & hope to have it finished by my birthday! Thank you again, Kathleen, a very unique thoughtful, gift indeed! 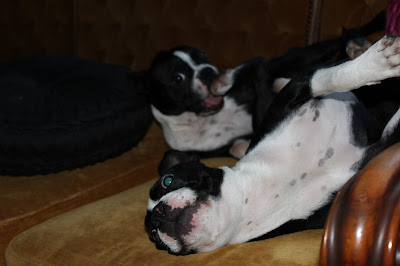 These two play fight with each other & are very noisy doing so! 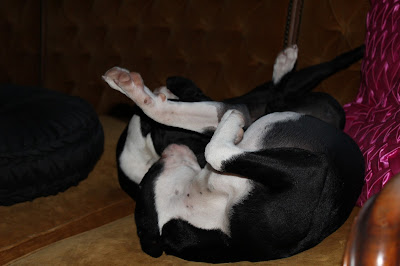 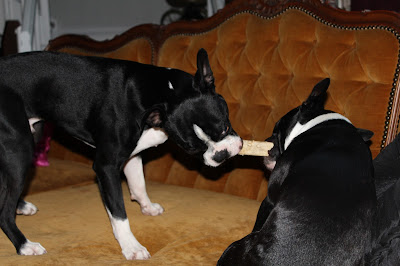 Tug of war with bones... 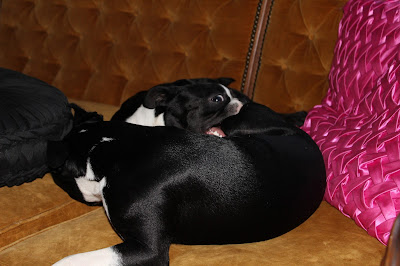 And bite one another... 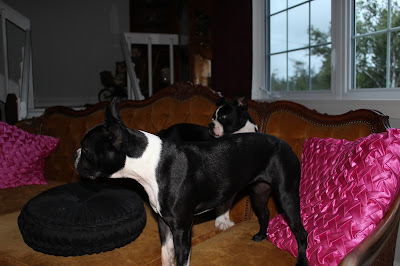 Then everything stops & they look... 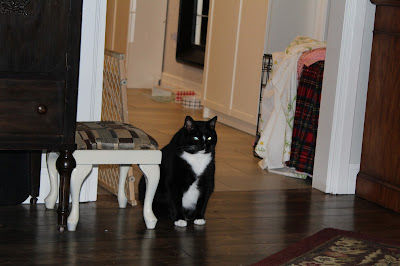 And see Mr. Boots! They are so afraid of this cat & the cat knows a preys on them. I sing the Dr. Suess song, 'You're a mean one, Mr. Boots, you're lurking in the halls, you're preying on young puppies, they are terrified of you! Mr. Boots... I need more lyrics lol
This 22-pound cat rules the puppies, especially Bridget. 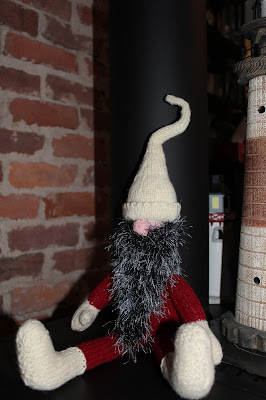 With everyone gone, my evenings are quiet so I have been knitting my Christmas Swedish Gnomes.
I did the large one this week & hope to start the medium one soon.

I also did some sewing & creating with four orphan blocks left over from the Crazy Stars Quilt that I did with my girlfriend Deb. I need a small quilt on the back of the deacon's bench as the pups stand on the back to look in the yard. 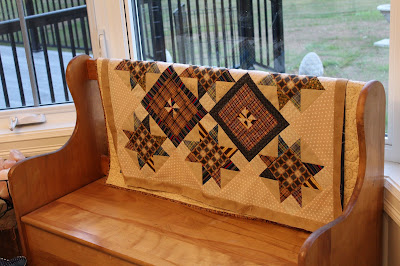 I was auditioning it over the summer Lone Star Quilt. 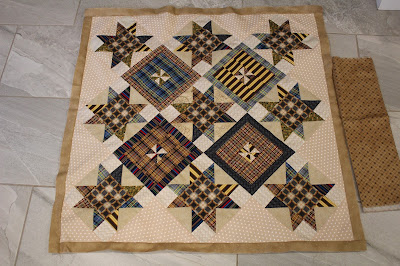 I'm going to put a 2 1/2" finished border around the outside with some Primitive Gatherings fabric that is on the right of the photo. 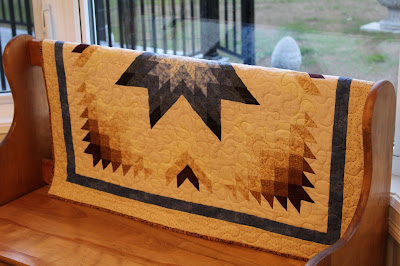 I just love Beth's Lone Star Quilt on the back & the other part is viewed when you're in the yard!
I use it in the summer as it enhances the blue & white dishes in the kitchen/dining area.

Well, thank you, for stopping by for a visit. Don't be shy & stop by again to see what is going on in the yard or just on the northeastern coast of the Atlantic. Fall is just around the corner for us!

The season of colour & my favourite time of year is coming!

Take Care,
And smile, it's contagious!