I spent the day & I mean the day, sewing & unsewing these great room drapes. I had three pieces of the same fabric for over ten years. I had at the time of this fabric purchase every intention to make drapes in our motor-home.
Oh yes the days of the motor-home & racing our Mustangs all through the USA. Bill knew that I didn't camp well & the traveling would be extensive so he surprised me one day with a used Land Yacht   Airstream motor-home.  I call it 'The SS Minnow', as there was always something breaking down & it was never a 'Three Hour Tour!' in that motor-home. The stories & fun we had those days still bring laughter however at the time, it brought near tears to me as I was always the one waiting for the part while they hunted down the parts needed, in the nearest city. Once, on a very raining day, the motor-home broke down. So off to the side it was left & the guys placed the jacks up on it to stabilize it & the gravel washed away & there was quiet the movement to that motor-home, I swear I aged ten years that trip! Scarred the living bejeebers out of me!! Anyway the motor-home has been long gone but the fabric remained.
So here's what was made with the Airsteam's fabric. Drapes just for a more stable vacation location.


Yes there was pattern matching to be done & the basting glue was used again to hold everything in place. 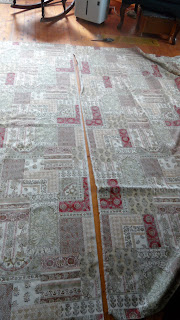 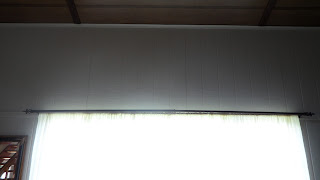 The rod was installed by me & my thumb was hurt in the process as the drill I was using will work straight or in an L shape. Well I pushed too hard on it - I later found out it was because the battery was low  that's why it never had the tork I was use to it having when I used it back in 2009. 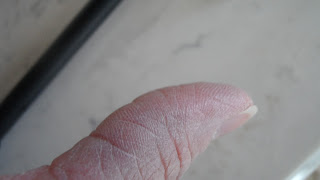 I thought it was going to be a blood blister but it just turned my finger blue & very sore. 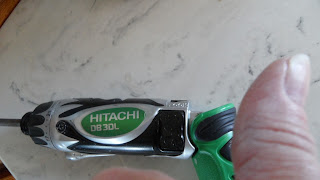 See the bend in the screw driver, well that's where my thumb was when it straighten out. Now what would WCB ask - 'How could this been avoided?' Simple it should have been on my husbands list to install before leaving! I can nail anything down but I'm no good at screwing! Yes I know how that sounds. LOL 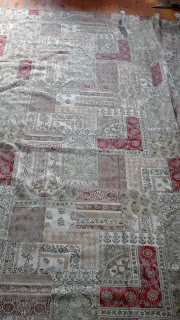 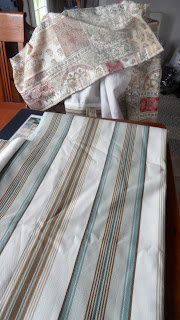 Now I have no weighted interfacing for the heading...hmmmmm let's improvise with using the outdoor fabric in the heading. Yes it works beautifully. 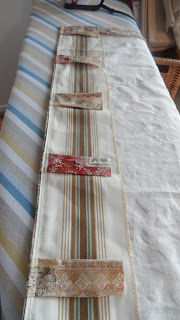 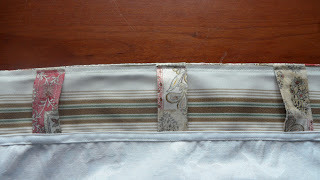 The heading is now complete. 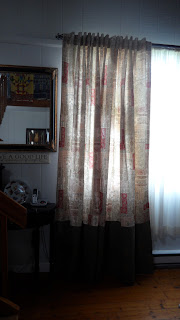 Now a new challenge, I need 95" of length. I had this green fabric that had pineapples embroidered on it & it would do the trick with the colours so similar in hue. 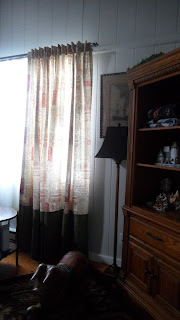 It did help weigh it down physically & the balance of it. Also it will not show the dirt/dust that will be near the floor as it's opened & closed. There was way too much fabric to interline with lining or blackout. I'm thinking of using the left over green pineapple fabric on the side windows in roman shades. However this window is the first to be replaced next year so i don't want to invest too much in it, just keep that west setting sun out of the room! 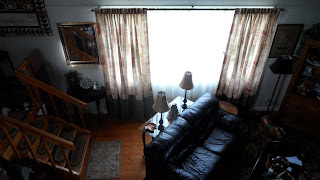 This is the overall look & I'm quiet pleased, it was a long day of sewing big pieces of fabric! 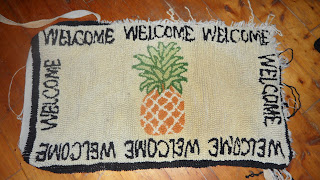 In the morning I did laundry & the old cat Bose threw up on this rug & I knew it was more than a 'spot clean' so I through it into the front loader & oh my! It came out clean...and shredded. 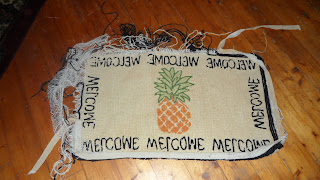 I'll be able to fix it somewhat with some hand sewing - it was a store bought rug I purchased years ago before my rug hooking days. It's hooked not in yarn but some kind of cotton string? I'll make it right again, it'll just take some time & patience. 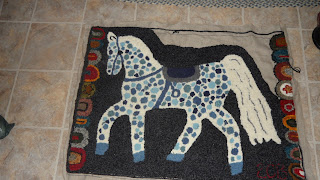 On a more postive note, the Stoneware Horse just has some background time needed before it's steaming to mat it down.

Property excitement this week.
We need more electric energy for the new house that's being build two doors east. The main PCB bucket is on this property, they reassured me it would last a long time...unless it blows up! OK? 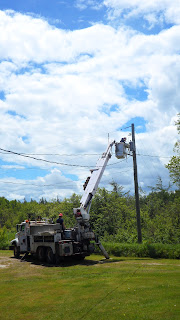 This pole is at the laneway opening. Watch how the beautiful blue sky changes in such a short time. 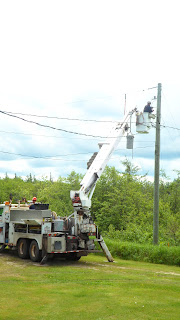 It was two fellows from NB Power working. 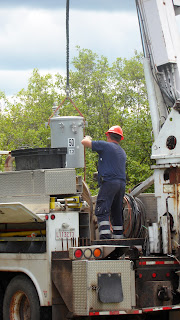 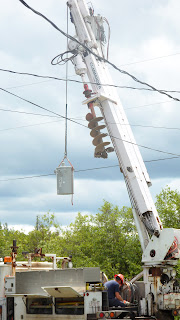 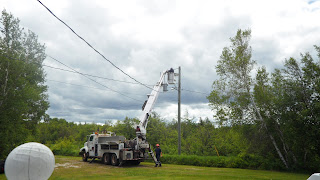 This is the view from the house. 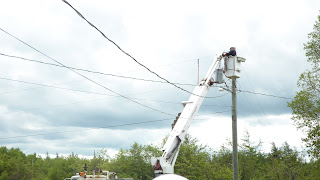 PCB Bucket of energy being recieved 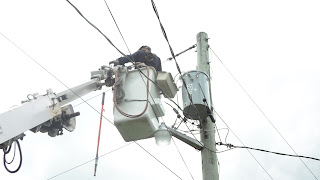 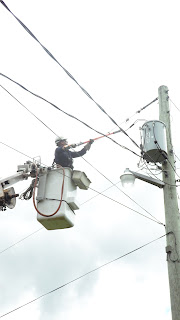 Hooked up & I have power again! 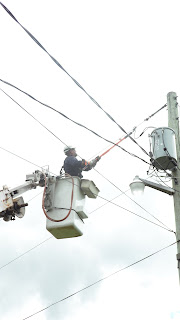 Yes the kettle is on! 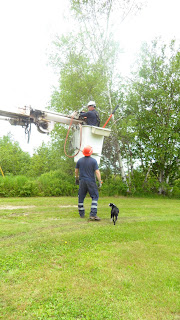 Boris supervised the whole process, then he came in for his afternoon nap.
Well that was another week at the cottage. And summer arrived yesterday & did we ever have a thunderstorm. Yes my studio is still leaking in two spots but I was there all day to keep up with it.
I can hear the grass growing again! 'Ode To Deet' is working for me though, when I'm on my big green tractor!