Adjusting To My Change

I`ve been adjusting to the time change & the change of areas & starting to remember where things are here in the house. The other day I could not remember where I put my baking pans to make an apple crisp. Good memory...just not long. Well it has been 6 months since I`ve seen this kitchen & 6 months from now I`ll probably go through the same thing in the cottage kitchen.

The wildlife is still here & I enjoy watching everyone of them, come for something to eat. 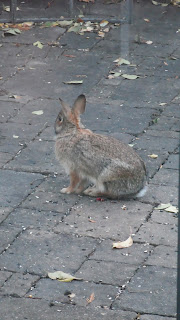 There was a rabbit hopping around... 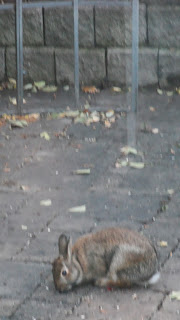 And by the size of him, I could tell he had an appetite for the sunflower seeds that had fallen from the bird feeder. 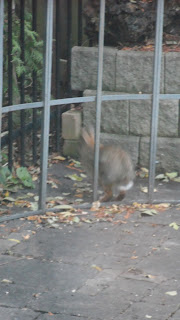 Then he was off on his way through the fences. So Peter Rabbit like. lol 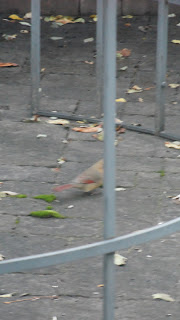 Then along came a female cardinal. 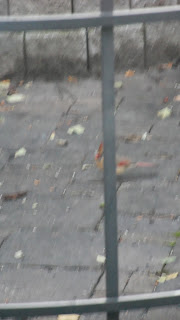 She was very hard to photograph, however her presence made my heart sing as I only see them when I`m here. The male is always close by but I never saw him. 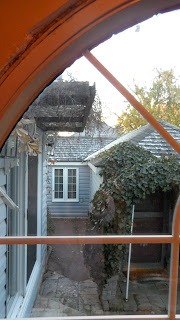 I awoke to a dusting of snow the other morning. 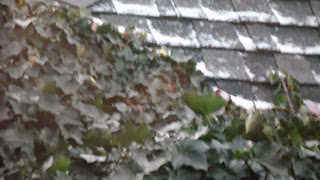 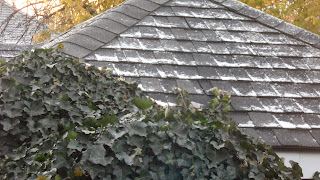 My studio has been over grown with the English ivy. 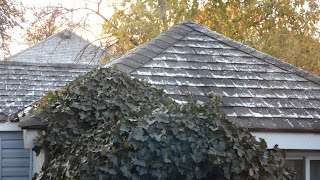 It was just a dusting to remind us of what`s to come... 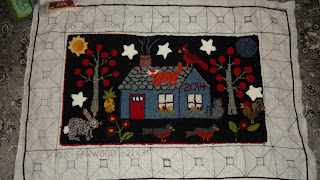 I`ve been working on my Fanwood Rug & did the rabbit the same colour as my backyard friend. I really like the way the robins in the foreground turned out.  I look forward to seeing robins as that is a sure sign of spring & that again... I survived winter. lol Yes I put 2014 on the rug as the year completed as that`s when it will be done. I also changed the border design to be done in a quarto of colour & I`m thinking of using black in the middle to ground the four colours it surrounds. Just like quilting, the work talks to me as I advance with it...time will tell & that`s the fun of creating. 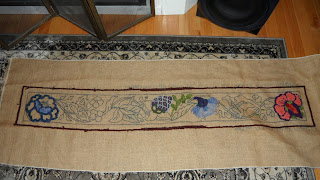 I attended a workshop for Crewel rug hooking by Linda Sullivan of St. Catherine's ON. 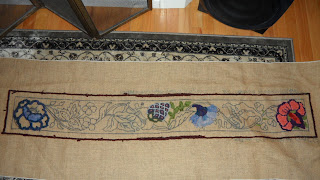 The runner was a UFO of Connie's & the blue hooked flowers are what she had completed on one of her workshops. I like blue so they're staying in & I'm working around her colour choice. 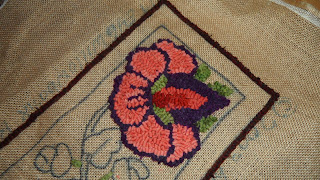 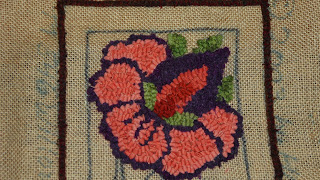 It very dainty yarn to work with,  much the same as the blue rose I did in the summer. I've also added the texture of the chain stitch for the stems. 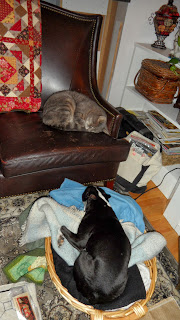 Boris the Boston Terrier & Tommy the cat have settled in nicely in front of the fireplace. Dreaming away...there's no place like home... 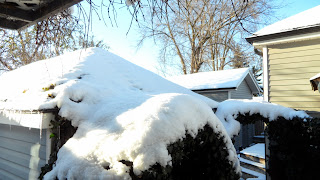 As the snow dusted morning was behind us & a morning of snow dumping upon us from an overnight storm front. 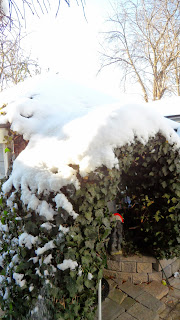 My English ivy does hold the snow, nothing seems to kill it. I'm going to take some out east this spring to see if it will take hold there.
This ivy is very special to me as it came from the casket floral spray of my English friend Eddie. After the burial, I took home some of the ivy to root in water. Once rooted & potted,  I then planted  the ivy in front of my studio window in 1996 & Eddie's English Ivy, has grown everywhere in the backyard since. 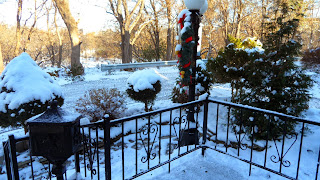 I'm so glad Bill & Nick put my winter tires on before all this. The 'Lake Effect' is starting & winter will be upon us soon. 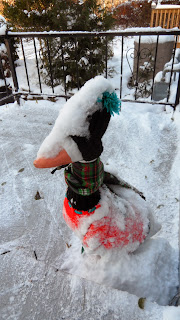 Even Lucy is getting snowed upon. lol 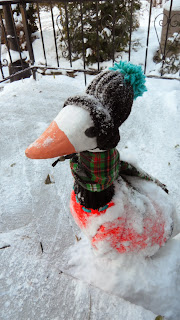 I dusted the snow off for the first time this year...I know it won't be the last!
Stay warm & safe my friends.