Winter has arrived again with more snow. Since the wind has died down it really is quiet pleasant to be out shoveling the white snow. It's hard to believe that next week is Christmas! I'm still making gifts to give away for this wonderful season. Here are a few things that I've been up to & trying real hard to finish for the Santa deadline. 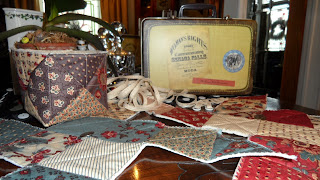 Little sewing bags made from Moda's Seneca Falls collection. Paulette & I were at a quilt shop...maybe nearly a decade ago & I purchased this sweet lunch box tin with a charm pack & fat quarters in it. I've admired it for years but this is now the time to use it & enjoy it! 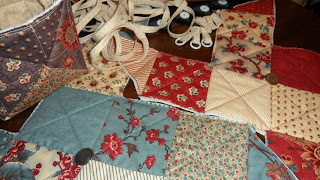 The colours are that of a mauve, red, & blue. I made a sewing bag in each colour! Now to get them all sewn up! 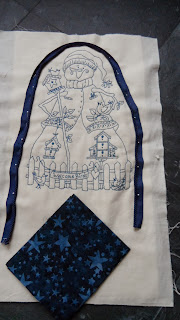 The embroidery is now done on my Snowman Doorstop. I found some piping that I'll install around the figure, the star batik is for the backing. I still need to put it together & stuff it & weight it with some crushed walnut shells. 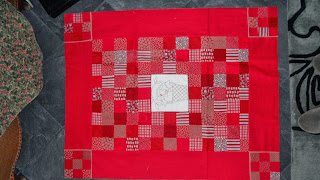 Going through my red stash for the Christmas Countdown quilt, I found a project from 2010. I know it was 2010 because it was embroidered into the star. I measured out a border & made cornerstones from the scrap blocks & voila, a sweet Christmas quilt top. 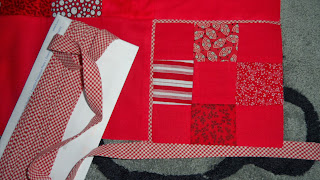 I trimmed it in the red gingham by accenting the cornerstones & made binding to finish it off. 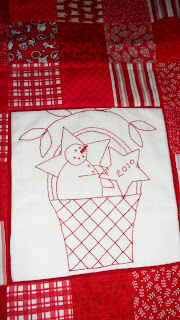 See what happens when you 'date' things! We're going into 2014 & it feels like yesterday when I made that! 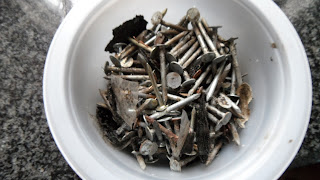 My mom would have an expression when she was mad...'I'm so mad I could spit nails!'
Well,  I could have had that feeling if I had not taken the time to pick up those nails from the roof install. When we had a quick thaw I went out to sweep up. 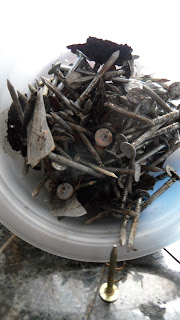 Several were found in my laneway,  right under my car! Others were gathered & swept up all around the roof's perimeter. The installer reassured me that the magnet would pick them all up. In 2010 my neighbour had her roof replace & I got the flat tire! I did not want that to happen to any of my neighbours, or myself & expressed this to the installer.
There were a lot of nails left behind & pulling the snowblower out...it too would have had flat tires! There are still nails buried under the snow that had not melted & will be seen with the spring thaw next year. 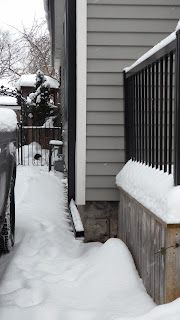 On a lighter note, the side of the house was fixed the next day, it looks as good as new. I had heard noise outside & a man was getting ready to re-install the corner piece.  I noticed it to be a bright white...not the colour match as I had the house done in creme. He took a broken piece for an example  & returned with the matching house colour. I'm so glad that I was home to redirect him to make the colour change. It does look good again. 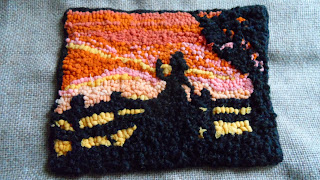 My hooking classes are great. We do postcard samples, 5" x 7". Pantyhose & yarn technique, my Scarlet O'Hara. 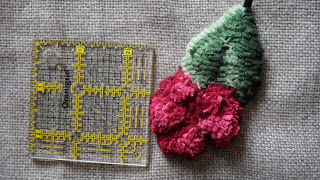 This is a raised & trimmed flower bud. That's a 2 1/2" square next to it. These techniques are great to learn. Tomorrow we're dyeing wool with Koolaid! What fun is that!! 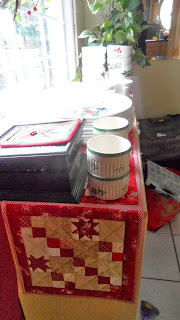 My runner with the Christmas dishes on it. 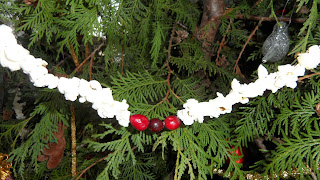 Real popcorn & cranberries, I strung them with a needle & thread whilst watching a Christmas movie one night. Bill was amazed that they were real, after Christmas the wildlife can have it. 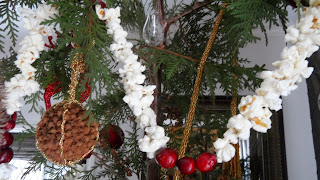 I made pomander balls from oranges, lemons, & apples. Yummy smell as the hang from the tree. 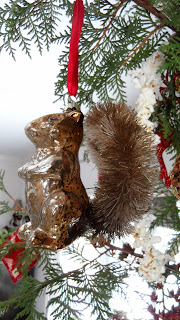 I purchased two new ornaments, this is the glass squirrel  ... 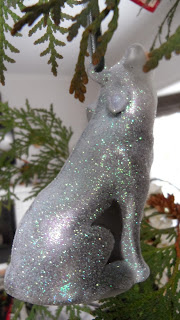 And this is the glass wolf or in my eyes it's Diesel, I waited for the before Christmas sales from the Brian Gluckstien's collection at Hudson's Bay. 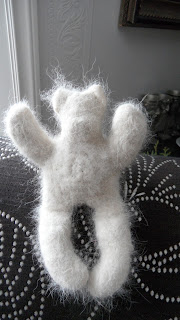 Going through my studio I found a cat I made from Diesel, the Siberian Husky's, hair. He had  daily brushing when he stayed with me when Mitchell was at Durham Collage. 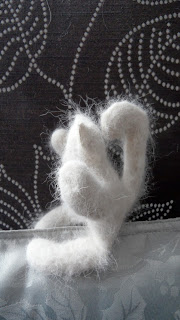 I made the cat body from muslin, then stuffed it with diesel's hair & started to felt the entire body... 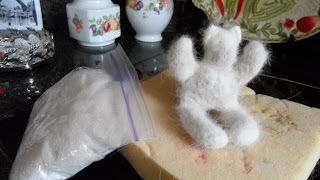 Felting is done on a very thick piece of foam with a small barred needle, the ears were difficult & I picked myself several times. 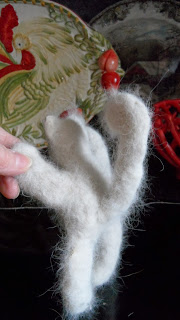 The big bushy tail wasn't easy either.  There's still more felting to be done & glass eyes to be sewn in. I thought it would be fun to make a cat with dog hair! 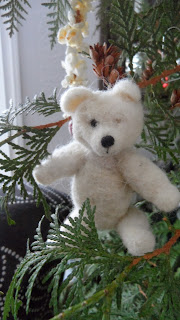 This is a wee bear I made a few years back from a class with Kelly Richardson. She also taught me to make a polar bear. Diesel got a hold of this bear & carefully took the ear & one eye off. I replaced the ear & that's when I found the cat, when I was looking for my felting supplies. 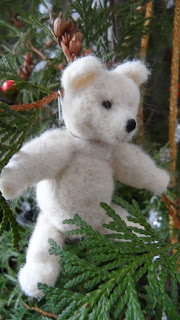 Bear has a better profile on the side. lol

Here's a blast from the past! 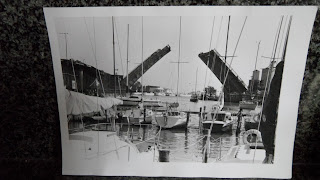 When cleaning & organizing I found this old photo I took back in 1985. When I was attending my 4 year art course at Bealart , I was in a photography class with Vivian Sturdy & she was teaching us 'pinhole photography' yes this picture was taken with a pinhole camera & I developed the picture too! Oh the things I have done in my charmed life!
This photo was taken at Port Stanley, Ontario & that is Bill sailing  the sail boat through the lifted bridge.

It's a beautiful life! Merry Christmas.
Posted by Kyrotime at 9:36 AM